Work on Site is Moving Ahead Swiftly 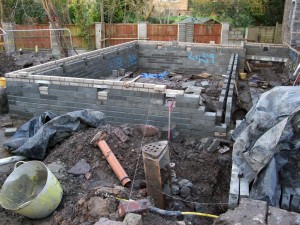 The contractors returned to Battens Lane last week, after the holiday break, and the concrete had cured nicely in the unseasonably warm weather. Eight thousand blocks were delivered between Christmas and New Year, and these are now going up quickly to form the sub-walls – which come up from the new foundations for the extension to meet the existing floor level. (See photos).

There was a query about where joists for the new extension would sit which we couldn’t resolve from the plans, so Archway got on with the drains while the architects and structural engineers double-checked everything and clarified exactly what goes where.

This week work on the drains continues, and digging out has now exposed the incoming gas, electric and (shortly) water supplies. We know where they go but will have to put up with them being in the way until the timber skeleton for the new building is there for us to move the main supply anchor points. 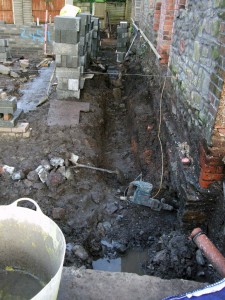 Digging in: A trench for the drains

Away from the site, Site Manager Elinor has tracked down the owner of the building before last occupants, Database, who still operate out of workshops in Kingswood. When they bought the property (From Fussell & Watts, whose details we had found on packing cases) they were given a pack of old deeds, charges, letters and documents dating some as far back as 1920s. These will give an even better picture of the history of the building, and maybe enough clues to look back even further. The rumour we had heard that the buildings were once stables appears to be correct. She is going to contact the local history society to see if anyone knows more or has pictures.