What’s going on at Battens Lane? Shareholder Jon Turney went down to St. George to see. 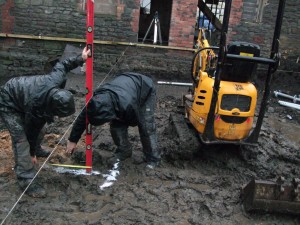 Nothing says you’ve got a real building site going like pouring concrete. And by the time you read this, that will have happened at our first development in BS5. Although AEOB’s overriding aim is building conversion, we are adding space at this site for two extra flats, and that means foundations.

And now we have them! The screw piles we chose were carefully inserted over the last week – they don’t need to sit as deep down as conventional piles, which suits the stiff clay underlying the site and cuts the amount of concrete needed, too. The next stage is to lay the concrete, which will then cure over the Christmas break. That means all is ready to begin building the timber frame for the extension in the new year.

It’s been a foundational year for AEOB in more ways than one. That setting concrete shows how far we’ve come, and confirms the project is on course for tenants to move in next autumn. But that in turn depends on the work achieved in 2015 to move AEOB on financially, legally, architecturally, and in our dealings with the planning system, as well as recruiting site workers and signing up the contractors who you can now see on the front page of the website. There’s the small matter of another £100,00 investment still needed to bridge the gap between what we can draw on from our existing investments and our Triodos mortgage and the projected total cost – but that will need more work next year.

I knew the site was developing fast, but that has kept everyone so busy – in a good way – that regular bulletins on the work in progress have been hard to maintain. So I went down there to see for myself. Here’s what’s going on, by way of an overall update, and as a prelude, I hope, to more frequent reports in 2016.

Elinor Kershaw, now well installed as project and site manager, says happily that the work “is all going reassuringly smoothly: we’re absolutely bang on schedule at the moment”. The day I showed up, extra scaffolding was in evidence, as a prelude to installing additional solar panels on the Southern slope of the roof. Extra lintels to support the panels were already in place. A small digger on the other side of the building indicated where the pile driving was following the outline of the extension.

So there was work in progress at the top and bottom of the building. In between, the shell of the old building (What was it originally? That’s uncertain but it was definitely a plastic film extrusion outfit not that long ago) has been reworked so you can see how the flats inside will take shape.

The old floors and the interior have been stripped out (the pine flooring will be re-used for some of the flats) and door and window openings remodelled. The North facing side of the building was originally stone, contrasting with the unusual triple layers of brick on the other three faces – again we’re not sure why – and is now a pleasing patchwork of old stone and brick. Plans for installing the under floor heating are well advanced, which along with the solar panels will help ensure the flats are cheap to run.

The new year will see a further schedule of new construction, with work starting on the timber frame on Feb 1, on a contract agreed with Natural Design and Build in early December. Then there’s lots more detailed work on the whole building. Drainage on the extended site still needs attention. The under floor pipes will be laid. There are stones and bricks to sort. The outbuildings, one now in use as a well-equipped carpentry workshop, will be remodelled as well. And there are plenty of possibilities to review on energy management, including whether suitable batteries can be installed to make best use of the solar panels, and even whether the currently planned boilers will ultimately be needed.

If that’s not enough, the work to develop the bigger picture that AEOB could be a part of needs to continue in tandem. Visitors come to see how the project was set up – the latest from a Community Land Trust in Lewisham in South London. And Bristol Green Capital promise to help arrange some financial modelling that should help make the case for larger-scale efforts to make better use of empty buildings that could be turned into homes.

The team continue to document how the project has got this far, so what has been learnt can be passed on to people in other cities. Lots of things about the project are locally specific. But Elinor sees lots to pass on from the processes and ways of working that have emerged in Bristol, and from experience here of the kinds of people and organisations to work with the move a project like this from a gleam in the eye to a real effort of brick, stone and concrete. As a (modest) investor, it’s great to see at first hand, and it will be even more exciting to see Battens lane take shape as a dwelling in 2016. Now we need to turn that excitement – and the project deadline – into a boost for raising the remaining capital in the new year, and ensuring the work that has gone so successfully up to now reaches completion on schedule.