Behind every successful dwelling is an architect – even if the building is converted from an existing one. Our project at Battens Lane is in the hands of Chris Askew and his colleagues, who run a practice in Bristol that specialises in sustainable, community oriented projects. 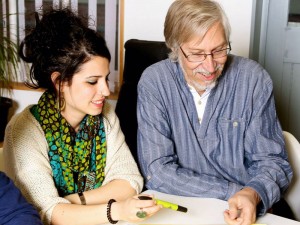 Chris and Nerea in the studio

Sitting in their well-lit studio in Stokes Croft, Chris recounts how they started in 2007, looking for organisations who, like them, were trying “new ways of doing things”. Business discipline has to be part of the decision-making, but profit does not rule entirely. They began with renovations, including the building that houses the studio, and others around Stokes Croft, and have worked on a number of housing projects intended to bring new life to old structures. They don’t always come off – a scheme to reshape Bristol’s defunct probation service HQ into housing was stillborn when the owner declined to sell. But the team are clearly excited by the principle behind AEOB’s project – that vacant buildings can be turned into homes – and, not least, by the fact that it is actually happening. 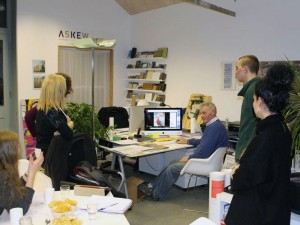 Chris Askew helped AEOB assess a string of potential sites. “I worry sometimes about existing buildings, because I know there may not be much left by the time we’ve finished”, he says. However, Battens Lane had plenty to work with. He saw a sturdy, stone structure, a site with land that could be used, and with planning permission already granted.

And, crucially, it was mortgageable. That eventually allowed AEOB to secure the loan from Triodos bank that led to the start of building last year. “A twenty-year mortgage is perfectly supportable for us. This is a long-term project, and the figures work.”

With planning and finance in place, the construction has now begun, guided by the detailed plans for, in effect, two buildings – one the conversion of the old structure, one the new, timber-framed extension which will add two flats to the completed complex. The two parts will offer a model of how to refashion an old structure to modern standards, and how to think about organising several dwellings in a single development.

The project architect, Nerea Gonzalez, qualified in Spain, in Pamplona, and came to Bristol to be involved in just such new ways of doing things. After two and a half years, she says, “I feel Bristol still has a lot to teach me about community and social issues. We need this kind of energy and ideas in Spain.”, she says.

Together, she and Askew have worked on details that maximise the benefits of the building and the site. Conforming to the existing plan means the flats are relatively small, so there is much to be gained from space-saving in the detailed design. High-performance, hence low-volume, insulation, under floor heating that obviated the need for radiators, and a common laundry room will all help here. Happily, these options are also in line with other important aims, including low-impact, sustainable construction, and low running costs for the tenants.

Anyone designing buildings for people to live in is looking for a long-lasting result. “People come and go, but the building will stay”, says Askew. At the same time, the prospective tenants who have already come forward are involved in as many design decisions as possible. The day we meet, there is an evening session scheduled where the tenants’ group will inspect samples of floor and wall finishes for all the different rooms – there are a range of tiles and floor coverings fixed to a board to focus the discussion. 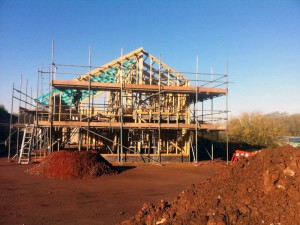 Solarsense Renewable Energy Demonstration Centre –
Being built by Natural Design and Build,
who will be doing the timber frame at Battens Lane

It is just one of the ways the project is quickly becoming real. Askew remarks how quickly the timber frame for another current project – a demonstration centre for solar energy company Solarsense – went up once the foundations were prepared. The same should soon be apparent at Battens Lane.

That will mark real progress on the extension. The detail of the larger, old building will be different. “It’s like an old pair of jeans, that’s been patched up over the years”, says Askew. But so far there have been no expensive surprises as the old structure had been stripped out and prepared for the next phase of its life.

“The first place you tend to lose money is underground”, says Askew. With the old structure stripped back, the foundations in place for the extension, and the drains dug, the contractors haven’t uncovered any subterranean problems. Although there is contingency in the budget, things look well advanced to Askew’s experienced eye. It’s a complicated building, but we’re now in a position to tighten up on the cost plan”, he says, which is good news with £100,000 of investment still needed to meet the full development cost before completion in the Autumn.

The whole project exemplifies a feature of architectural practice that must be particularly satisfying. If you really care about things that matter for the future – like affordable housing, using natural materials, energy efficiency and sustainable living, you can actually build things that embody those principles from the foundations to (solar panelled) top.