Even small DIY jobs seem to end up with loads of rubbish, and my family will tell you how much of a pain I can be about sorting rubbish for recycling. So on site I’ve put a lot of thought into it and am finally getting the system working properly. 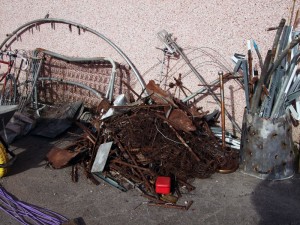 At the beginning, clearing the site was a challenge. The land on which the extension is being built had been a dumping ground for years. The previous tenants of the bungalow had left bags of rubbish, toys, clothes and all sorts that had to be cleared. The previous owners of the industrial building had burned cable reels and boxes. Before them a succession of building improvements had dumped old glass, metal, pipes and rubble in the garden.

Scrap metal was easy to dispose of. To deal with the rest I found a skip company with a good system for separating waste so that when we did need to send mixed and construction waste it would be properly processed. 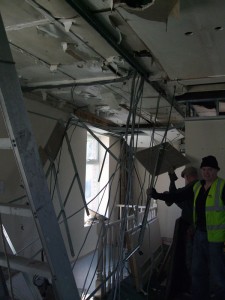 There were other things left behind in the building, yard and store which we needed to shift. A lot of data networking equipment went to two senior schools, one in South Wales and one South of Bristol for use in their IT teaching. Lots of plastic trunking, and pipes, went to the Scrapstore, which makes unwanted materials available for schools and children’s groups. Some water tank insulation is being re-used by a friend of AEOB to insulate their campervan, and boxes of children’s party supplies will be given to a local centre supporting low-income families.

When it came to stripping out the building, we re-used the kitchen in the welfare/break room along with some of the lights, and cleaned up most of the timber to re-use. A lot of wire came out which has been checked and some of it used in the lock-ups, with more available when we do more on them later in the project. 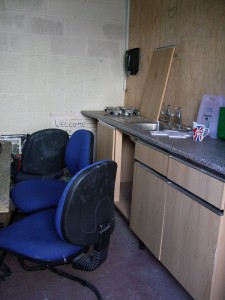 There was also a lot of plasterboard to remove, and that has to be separated by law and went with our skip provider. We also took the frame from the suspended ceiling along with the other scrap metal and saved a bit of money.

We have a lot of stone and old bricks which came out when the new door and window openings were made. Some of the stone has been traded with our blockwork subcontractors, Archway, toward some walling work we need later on, and our volunteers have been working hard cleaning up the whole bricks to make them usable for raised beds or perhaps for paving the yard. Most recently the double glazed units from the old windows were advertised via Gumtree and collected by a family using them to build a greenhouse at their allotment. 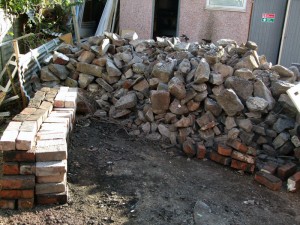 Now construction is under way there is a constant supply of rubbish to deal with. We have recycling and rubbish bins on site with rubbish separation bins in the kitchen, and a big poster in the break room which helps people know where to put stuff. The worst thing (apart from waiting for bins to be emptied when they are plagued with breakdowns) is getting people to pay attention and be bothered to think about where they put stuff. We always try to divert items for re-use where possible, or to recycle them, and all the companies who take waste off site for us have been chosen because of the way they handle it. Yes this is best practice in business, but we also do it because we are passionate it’s the right thing to do. 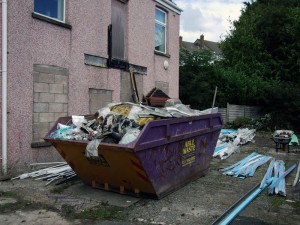 So with enough attention to detail we can dispose of a huge range of stuff usefully. One unsolved problem, though, is the sawdust from the workshop. It is mostly treated timber so can’t be used for animals or compost and I’d rather not just dump it in the skip. I’m hoping one of the local companies which handles scrap wood will let us have a dedicated bin to collect it for them.

It all goes to show that as well as reinventing a building we can re-use a great deal of what comes out of it.