Welcome to the first issue of our newsletter. We update our website, facebook pages and twitter feed regularly. But not everyone spends their life on the internet. This occasional newsletter is for shareholders, and anyone else, who prefers to keep up to date this way – whether electronically or in print.

How far have we got? 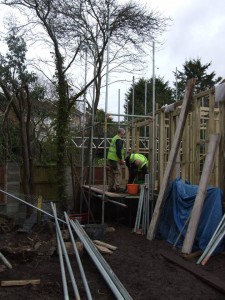 As you can see above, building work on our first site in Battens Lane is well under way. That’s the timber frame for the extension going up. Everything is on schedule so far, and we’re starting to sort out who will be considered for tenancy, and how to frame agreements and leases. All looks set for completion… and occupation in October!

All this was made possible by our funders – shareholders, donors, and Triodos bank, who agreed a mortgage for roughly half the project cost last August. That was the signal to move ahead with work on the site we acquired at the end of 2014.

Lots has happened since then and for the rest of this update, we reproduce short versions of some articles from the website, that enlarge on how we got to this stage.

Nothing says you’ve got a real building site going like pouring concrete. And as the picture shows, that’s where we’re headed in BS5. Although AEOB’s overriding aim is building conversion, we are adding space at this site for two extra flats, and that means foundations. 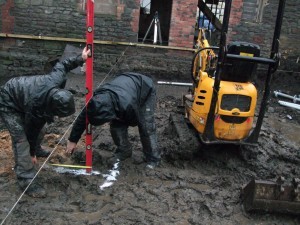 And now we have them. The screw piles we chose were carefully inserted over the last week – they don’t need to sit as deep down as conventional piles, which suits the stiff clay underlying the site and cuts the amount of concrete needed, too. The next stage was to lay the concrete, so all was ready to begin building the timber frame for the extension in the new year.

It’s been a foundational year for AEOB in more ways than one. That setting concrete shows how far we’ve come, and confirms the project is on course for tenants to move in next autumn. But that in turn depends on the work achieved in 2015 to move AEOB on financially, legally, architecturally, and in our dealings with the planning system, as well as recruiting site workers and signing up the contractors who you can now see on the front page of the website.

Elinor Kershaw, now well installed as project and site manager, says happily that the work “is all going reassuringly smoothly: we’re absolutely bang on schedule at the moment”.

The old floors and the interior have been stripped out (the pine flooring will be re-used for some of the flats) and door and window openings remodelled. The North facing side of the building was originally stone, contrasting with the unusual triple layers of brick on the other three faces – again we’re not sure why – and is now a pleasing patchwork of old stone and brick. Plans for installing the under floor heating are well advanced, which along with the solar panels will help ensure the flats are cheap to run.

The new year saw work start on the timber frame on Feb 1, on a contract agreed with Natural Design and Build in early December. Then there’s lots more detailed work on the whole building. Drainage on the extended site still needs attention. The under floor pipes will be laid. There are stones and bricks to sort. The outbuildings, one now in use as a well-equipped carpentry workshop, will be remodelled.

The team continue to document how the project has got this far, so what has been learnt can be passed on Lots of things about the project are locally specific. But Elinor sees lots to pass on from the processes and ways of working that have emerged in Bristol, and from experience here of the kinds of people and organisations to work with to move a project like this from a gleam in the eye to a real effort of brick, stone and concrete.

We are closing in on our total project funding, but not quite there yet. The total raised so far from shareholders’ investments and donations is over £300,000. We have a £425,000 mortgage from Triodos bank. Most recently, the Quaker Housing Trust awarded AEOB £50,000, as a grant combined with a loan. That still leaves a few tens of thousands needed to match the projected total project cost – and the sooner the better – teel your friends! We will be working to spread the word over the next few months. Then come the big decisions about how and when to proceed with a follow-up project.

Behind every successful dwelling is an architect. Our project at Battens Lane is in the hands of Chris Askew and his colleagues, who specialise in sustainable, community oriented projects.

Chris helped AEOB assess a string of potential sites. “I worry sometimes about existing buildings, because I know there may not be much left by the time we’ve finished”, he says. However, Battens Lane had plenty to work with. He saw a sturdy, stone structure, a site with land that could be used, and with planning permission already granted. 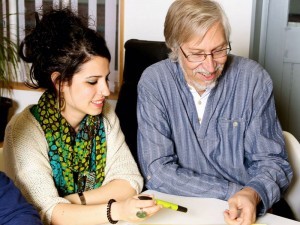 And, crucially, it was mortgageable. That eventually allowed AEOB to secure the loan from Triodos bank that led to the start of building last year. “A twenty-year mortgage is perfectly supportable for us. This is a long-term project, and the figures work.” With planning and finance in place, the construction has now begun, guided by the detailed plans for, in effect, two buildings – one the conversion of the old structure, one the new, timber-framed extension which will add two flats to the completed complex. The two parts will offer a model of how to refashion an old structure to modern standards, and how to think about organising several dwellings in a single development.

The project architect, Nerea Gonzalez, qualified in Spain, in Pamplona, and came to Bristol to be involved in just such new ways of doing things. Together, she and Askew have worked on details that maximise the benefits of the site. The flats are relatively small, so there is much space-saving in the detailed design. High-performance, hence low-volume, insulation, under floor heating that obviated the need for radiators, and a common laundry room will all help here. Happily, these options are also in line with other important aims, including low-impact, sustainable construction, and low running costs for the tenants.

Anyone designing buildings for people to live in is looking for a long-lasting result. “People come and go, but the building will stay”, says Askew. 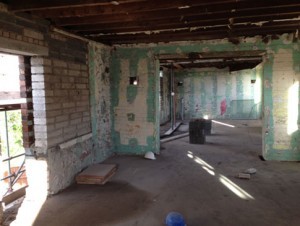 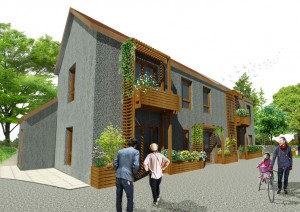